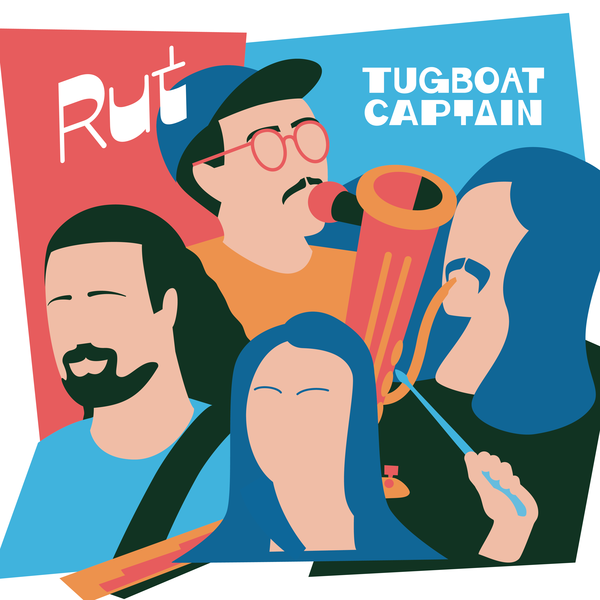 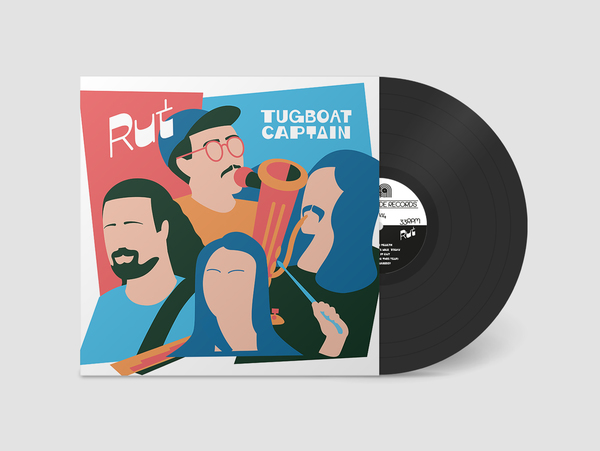 Rut is the debut studio album from indie-pop 4-Piece Tugboat Captain. Often cited as one of the hardest working groups in the London DIY scene, the band emerge from the sonic limitations of their previous homespun bedroom-pop efforts into higher fidelity, accompanied by their ramshackle orchestra of friends to present their most ambitious work to date. Whilst being a grand, symphonic baroquepop record, the album loses none of the intimacy of the previous work that garnered significant critical acclaim across the UK DIY community. Tugboat Captain spent the last year secretly using free studio hours at Abbey Road, inviting a wide variety of friends and collaborators to feature on the new album out this October 16th on Glaswegian label Double A-Side Records.

Whilst previous Tugboat Captain releases have focused on matters of the heart, Rut is something of a coming of age record, with Sgt Pepper’s-esque opening track ‘Check Ur Health’ introducing themes of living without agency and being less successful than your friends. This spans the album with second single ‘Day To Day’ closing the album as an anthem for Gen-Z apathy and frustration:

Although written well over a year ago, the recurring themes of stasis and frustration have become eerily prescient of a very strange 2020, none more so than on lead single ‘No Plans (For This Year)’ which manages to capture the mood of a generation of young adults whose lives have been put on pause. There’s also a dark, tired sense of humour that recurs across the album. Frontman Alexander Sokolow’s lyrics have seen significant growth over the last few years, first seen on previous singles ‘The Distance’ and ‘Be Strong, Smoke Less’. The dry wit found in those songs can be heard across the new album, most notably on ‘C’mon! Haribo?’ where the influence of Trust Fund can be heard bubbling to the surface with lines like:

“C’mon! Alex, get a grip! It’s clear that she’s moved on And you’re still eating sweets for lunch”

The influence of The Beatles, Sgt. Pepper’s and recording in Abbey Road can be heard throughout the record with the expansive arrangements from keyboard and bassoon player Buddy Caderni lending a new-found confidence to the songs. This all comes hand in hand with the tongue-in-cheek, wink and nudge that takes from the self-aware bombasticity of bands like Foxygen, The Divine Comedy or even The 1975. From wistful woodwind ditty ‘Downward Slope’ to country-inflected ‘Damned Right’, the band display a wide variety of influences from across classic-pop history, all with the songwriting at the centre, whilst mid-album track ‘Come Dig Me Out’ manages to wander through poetically introspective The Wave Pictures, Os Mutantes’ groovy, psyche-Tropicalia and on to Tom Jones-esque loungecrooning courtesy of Enjoyable Listens’ Luke Duffett, all within the space of three minutes.

At the heart of the album you can hear a group of friends in their early 20’s pushing the boundaries of their zerobudget DIY status as far as is possible. With the vast group of friends and collaborators across the album you can hear a band reaching beyond their means, outside of the traditional parameters of ‘scene’ and ‘cool’. Having achieved notable success already, with a Netflix feature, sellout nationwide tours, a recently cancelled US tour including dates at SXSW and a significant number of streams whilst still maintaining total independence, the band have now pushed on, beyond being solely a DIY indie-pop band, leaving lo-fi behind in search of transcendence through pure pop